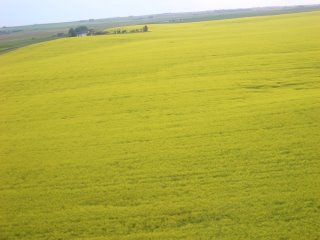 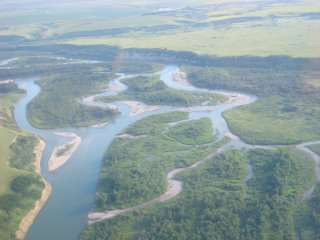 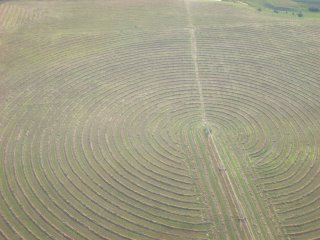 My dad decided that it was about time that he came to visit us in Calgary. It was his first visit to Canada (and his first trek outside the US). He arived late on Monday, July 3rd and stayed until early on Wednesday, July 12th. We tried to pack in the maximum amount of “stuff” into his time here. I had to work the first two days so he had to entertain himself. I did leave him the car but Calgary is not the easiest place to get around in if you aren’t used to a big city. He did manage to find the Hobby Shop and the Harley Davidson showroom for some window shopping. After work Dewey took him out to Strathmore (about 30 min east of Calgary). They met up with one of Claire and Don’s friends Richard. Richard owns his own plane so he took my Dad and Dewey for a flight. Dewey was very excited b/c Richard let him fly the entire trip (except for the takeoff and landing). It gave my dad a chance to see what Calgary and the surrounding areas look like from the air.

On Thursday, Claire and Don joined Dad and I for a drive to the Columbia Icefields. I’ve lived in Calgary for almost 2 years now but hadn’t made the trek. It was really cool! 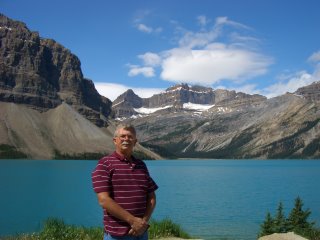 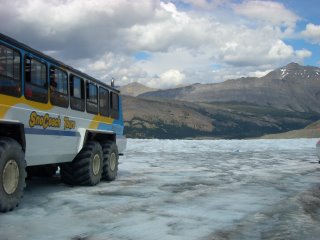 It didn’t help much though b/c I stuck my foot into a hole full of icy water about 2 seconds after we got off of the bus! We had about 20 minutes to explore the small section of glacier we were allowed on and then it was back on the bus to go back down. I probably won’t go again but I think it’s definitely worthwhile to do it once. 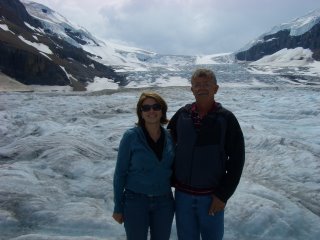 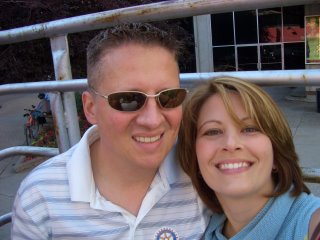 Dewey took off from work on Friday to join in the festivities. Friday was the kickoff of the Calgary Stampede. It is one of the largest rodeos in the world. It lasts for 10 days and takes place in Calgary. People who are normally very straight-laced and wear three piece suits use the Stampede as an excuse to don cowboy boots, Wranglers & a cowboy hat. Most of them also use it as an excuse to drink their face off! We all got up bright and early to head downtown to watch the Stampede Parade. It had over 170 entries. Some were floats, some were riders on horseback & some were bands. Overall it was very impressive. To start off the parade, the Snowbirds flew over three or four times. 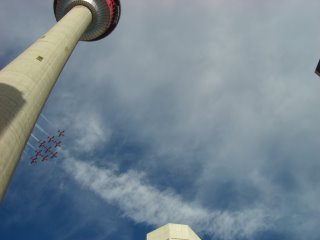 The Snowbirds are the military air show brigade kind of like the Blue Angels in the US. It’s always really cool to see them. After the parade we got to test out the readiness of the Calgary transit system to handle that many people. After waiting for 45 minutes, we managed to shove Nana & Papa Don onto a train but Dewey, Dad and I had to walk home. It’s a good thing that we don’t live that far away!

In the afternoon, Dewey, Dad and I headed over to the Stampede Grounds. Dewey’s dad, John, had managed to get us tickets to the Chuckwagon races that night. John’s cousin, Darlene, works for Ramada (the sponsor of the chuckwagon). 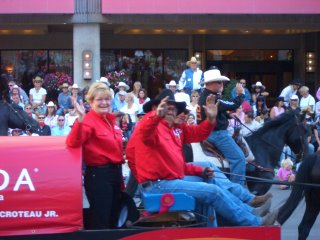 She got us the tickets and got us invited to the pre-race barbeque. Dad and I got to go on a barn tour and see all the horses before the race. 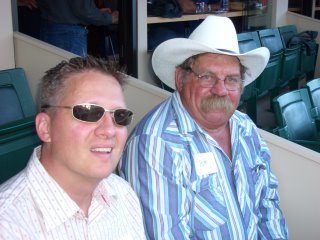 Then something great happened…..instead of having to sit in the rush seats we had…..we got invited to the infield suites. The suites are right down at the action. 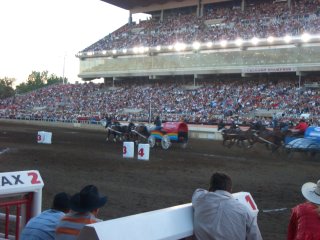 We could see the start and the finish of the race so well! It was really awesome. I had to keep telling Dad that this is definitely NOT where we would normally get to sit! After that we headed home. We watched a little of the grandstand show but it was really cheesy so we left. 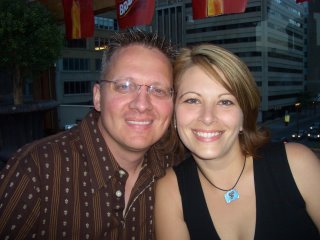 On Friday night, Deanna and Angelle arrived. Deanna is our friend from Austin and Sven and Angelle are our friends from Houston. Sven had to be in Calgary the week prior for meetings so Angelle decided to join him in Calgary for Stampede week. 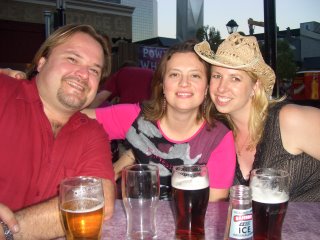 Deanna heard about all the fun and decided to join us as well. Deanna stayed with Dewey and I while she was here.

On Saturday morning, we all headed out to the 1885 Cafe for breakfast. After that we split into two groups (guys and girls) to go and do some shopping. 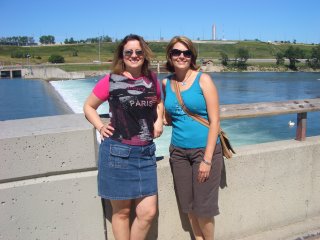 The girls bought cowboy boots, etc and the guys went car shopping. Dewey put a down payment on a new 2007 Saab. Unfortunately it won’t be ready until September…..not sure how he’ll be able to wait that long! On Saturday night we headed downtown to Ceili’s (an Irish pub). My dad decided to skip it and went to the casino instead. We did lots of people watching downtown since most people had had WAY too much to drink.

On Sunday we headed back down to the Stampede grounds for the rodeo. We were a little late so we missed a bit of it but we still had a great time none the less. Unfortunately a storm blew up and we were getting rained and hailed on for the last bit of the rodeo. Thank goodness Angelle had decided that we should upgrade to covered seats! After hanging around a bit to see if the rain would stop, we decided to head home and order in pizza. We were all tired so it worked out fine.

Deanna headed back early Monday morning. Dad went fishing with Papa Don on the river on Monday as well. Unfortunately the rainstorm the day before wreaked havoc on the conditions so Don only caught two small fish and my dad didn’t catch any. After work, Dewey, Sven , Angelle and I joined them out at Nana & Papa Don’s house for dinner. Claire (nana) amazed everyone with her culinary skills (as usual). 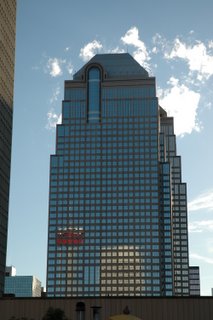 Tuesday was my dad’s last day in town & I had to work. He mostly just hung around the house. 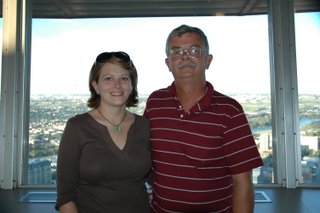 After work we took him down town to the Calgary Tower for his last glimpses at the city. Dewey showed how scared he is of the new glass floor. I think Dad enjoyed his trip. Hopefully he’ll come back 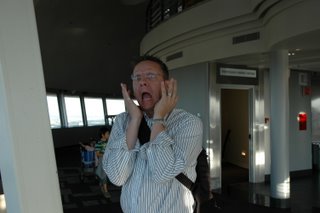