Here’s the situation……I had a potluck on a work night but I didn’t want to show up to my first blogger meetup with storebought treats.  What’s a girl to do?  Make a cheat recipe of course! 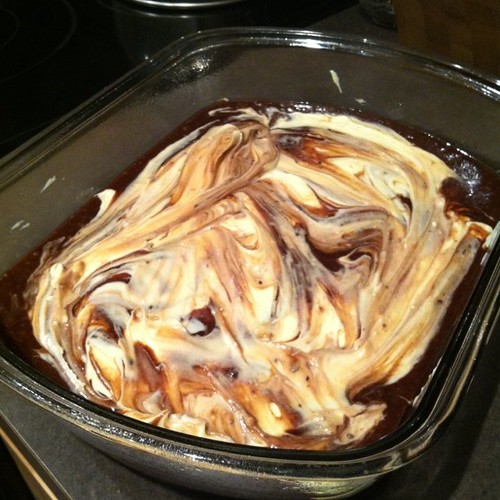 Inspired & adapted from this recipe by Notes from the Cookie Jar

– ingredients called for on the brownie mix box

Prepare brownie mix by the box instructions.  Pour into a prepared baking pan.

Spread cream cheese mixture evenly over brownie mix.  Sprinkle with chocolate chips.  Bake for 30 – 35 minutes or until the middle of the cheesecake layer puffs and is set.  Cool completely before serving.  Store in the refrigerator.

Recipe Notes: These were awesome & no one was the wiser that they were a “cheater” recipe.

Head over to Shan’s to see what else is cooking this Wednesday!

Oh my goodness, these sound DIVINE. Definitely going to have to try this recipe! Love it!

I love this recipe. And I love cheater recipes. Sometimes they are just what the busy Mom needs. Thanks for being such a great What's Cooking Wednesday supporter. I appreciate it!

Yummy!!! I am going to have to try those sometime!