Today was a great Saturday. It started out right when I got to sleep in to the unheard of time of 9am!!!!! Amazing, I know! Dewey went to see Nicole play soccer at Super Soccer Saturday and he took Evan with him. While they were gone, I walked for almost 2 hours to train for the 60k walk I’m doing in a few weeks (no, I am not really ready but I am going to pretend that I don’t realize that). After they got back, Dewey had to head south of Calgary to High River. The company that we work for has a big customer event at the Chuckwagon races there this weekend. He got to cook hamburgers for 400+ people. Lucky him! I was going to go down too but it’s an hour drive each way so I decided to skip it. 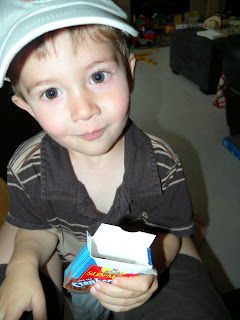 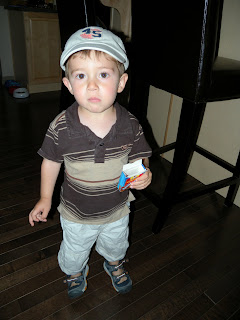 When did my baby turn into a little man?

After Evan’s nap, we decided to hit the road & get some errands done. First stop was the Crossroads Farmer’s market. I normally hit another market in town but I had heard that the prices were much better at this one. After shopping, I think that’s definitely the case. Before stocking up on fruits and vegetables, Evan and I had a plate of Ukranian goodness….kielbasa, perogies & a cabbage roll. Evan loved the perogies, I loved the kielbasa. The cabbage roll was just okay so I left it. No need to eat that last 10,000 calories if it’s just okay!!! 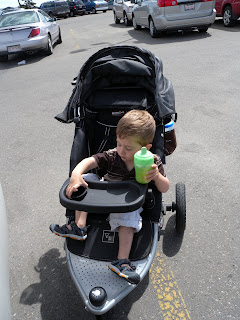 Getting loaded up in the stroller to head into the farmers market. This was after the screaming ceased. To get that to happen I had to threaten to go back home. This threat included taking him out of the stroller and putting him back in the carseat. He began to realize that I was completely serious. Thankfully he then started saying “stroller…stroller”. 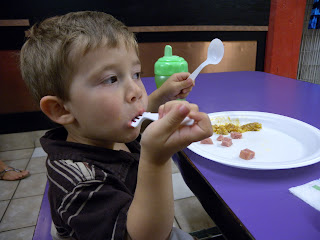 After the farmers market, it was off to Costco & then to the grocery store. We got lots done (and spent a bundle…eeep!). Now we’re ready for our Father’s Day/Evan’s Birthday (early) celebration tomorrow with Will, Nicole, Nana and Papa Don. Evan’s in bed & I’m sitting here listening to the silence. 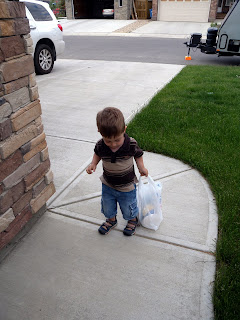 Helping me carry in the groceries. 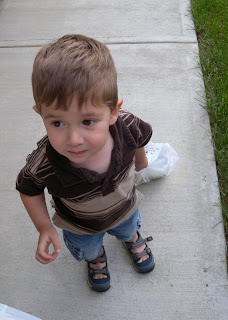 Thankfully the ice cream came in a plastic tub that lived through being drug up the sidewalk. 🙂

And since that was so much fun…here are a few orphaned pictures I haven’t posted yet: 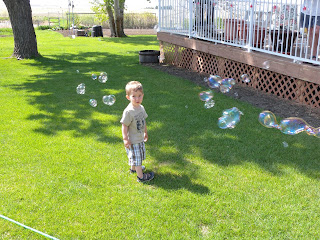 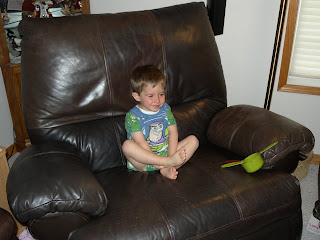 Sitting in the big chair watching TV (which he pronounces DT) 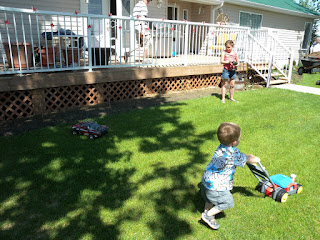 Mowing the grass with his bubble mower. 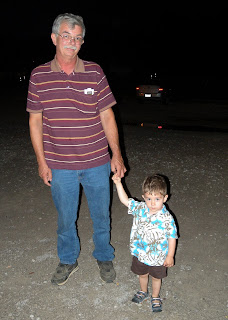 Evan and my Dad on our last night in Alabama. I still think they look alot alike! 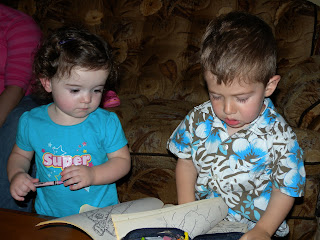 Evan and his cousin Allison 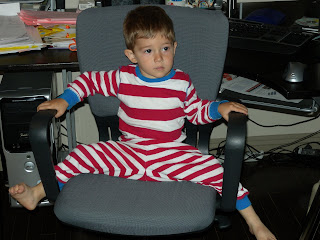 Evan showing off his uber-flexability. After doing this he couldn’t get out & kept saying “Help, help” until I helped him. 🙂

Hope you had a great Saturday, too!!!!

Evan goes to bed at 7:30pm and gets up anywhere from 6:15am to 7:30am. It's usually towards the earlier part of that range. If he gets up before 6:30 we just let him cry until 6:30....don't want to encourage that! We've thought about moving his bedtime later to see if we could get him to sleep later but it hasn't worked when we've tried it.

Looks like you guys had a great time! What time does Evan usually get up? I guess we're pretty lucky - Owen and Mason sleep from 9 pm until 8:30 or 9 am every day.