Sometimes I feel like I have been sick since November!  I’m down with yet another cold/flu but I keep telling myself that this is IT, the last one for winter, no…..really!  Regardless, here’s a recipe for you though I am slacking on the picture.  Sorry!

Recipe Notes: Just to be clear….this is using a fully cooked, smoked bone in ham NOT a raw ham!  Since we have a small family, I cut the ham in half.  I cook half now & then freeze the other half to cook later.  If you have a big family (really big) you can cook the whole thing.

Directions: Preheat oven to 350 degrees.  Place ham cut side down in a large oven proof pot.  Pour in Coke.  Cover pot with lid or aluminum foil.  Bake for ~2 hours.

Mix brown sugar, mustard and juice into a thin-ish paste.  Take ham out of the oven, pour out most of the coke (leave about 1/2 inch), and brush mixture on the ham.  Recover and put ham back in the oven for another 30 – 45 minutes.  Let rest for a bit before cutting.  Serve.

Leftovers & the ham bone can be used to make Crockpot Split Pea soup (which is what I did) or Ham Tetrazinni.  This is a very inexpensive way to make dinners for the whole week.  I bought my ham at Costco for ~$20.  We cut the ham in half.  We cooked half for dinner Sunday night and froze the other half.  I then made Split Pea Soup for supper last night.  Half of that went in the freezer.  So for a $10 half of ham we got 2 dinners, tons of leftovers and a dinner of soup in the freezer.

Visit Shan over at The Fairy Blogmother to see what else is cooking this Wednesday!

365 Day Photo Project – I almost forgot to post it! 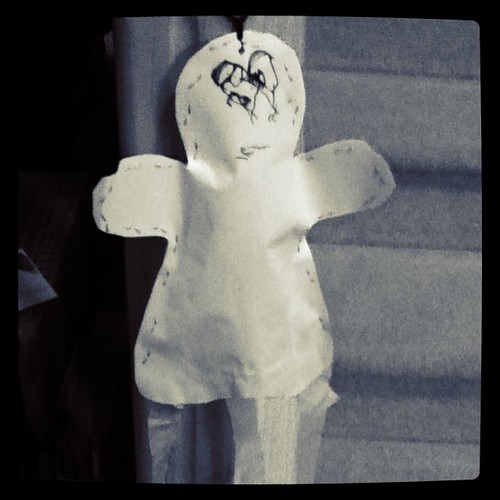 Evan’s Halloween ghost is still up after New Year’s.  Might as well leave it up until Halloween now!
0 shares
Click here to cancel reply.

Mmmm sounds great. We love ham. Thanks for the recipe Merry!

YUM! This ham sounds delicious.. I will have to give it a try!