I must admit that though I am Southern, I don’t cook many of the traditional “Southern” foods.  My grandmother was an amazing cook but she had a stroke before I was really old enough to realize how much I would want to know how she cooked later in life.  Most of the things I remember her making the most were things that she didn’t use recipes for….like biscuits.

Last week, my friend Colleen posted on Facebook that she was eating a biscuit.  I promptly asked her for the recipe.  These aren’t exactly like my grandmother’s biscuits but they’re pretty darn good. 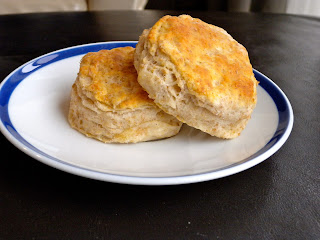 Little Red Hen’s Biscuits
from Colleen….her daughter made these in Kindergarden.  I have no idea where the recipe is from.

Preheat oven to 450 degrees. Combine the dry ingredients.  Cut the butter into the dry ingredients (I used 2 knives) until crumbly.  Mix in milk and mix well.  Turn out onto a floured surface.  Knead a few times & then roll the dough out to ~3/4 inch thickness.  Cut out 2 inch circles (I used a glass).  Place on an ungreased cookie sheet.  Put the biscuits touching if you like soft sided biscuits or apart if you like them crunchier.  Bake for 10-15 minutes. 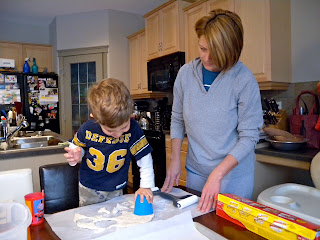 Recipe Notes: These were very good and nicely flakey.  If I had one “complaint” it would be that I found that they needed a little salt.  Not a biggee though.  These were awesome when split and filled with a slice of peameal (back/Canadian) bacon or with butter and jam.  Yum!!!

Yum...more biscuits:)......I might have to go have one right now! They do look good and half whole wheat has got to be healthy now doesn't it?