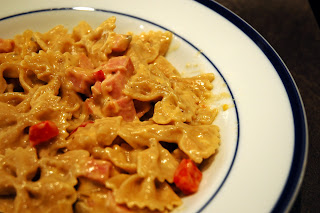 So I’m not sure what came over me but I decided to buy a 1/2 ham, cut it in 1/2 and cook part of it for me and Evan for dinner the other night. That’s right….me & the boy who doesn’t eat meat. Great idea! I ate lots myself but there was still a ton left over. I decided to try to figure out a way to get Evan to eat it…..so basically it had to involve noodles somehow. Here’s what I found

In a large saucepan over medium-high heat, saute chopped onion and bell pepper in butter until tender.

Add ham and cooked (and drained) pasta. Stir until heated through and serve hot.

Recipe Notes – This turned out pretty good. I’m not a huge fan of recipes using condensed soup but I could see using this again. Evan ate the noodles but picked out the ham. Doh!

See what else is cooking this Wednesday over at Shan’s!