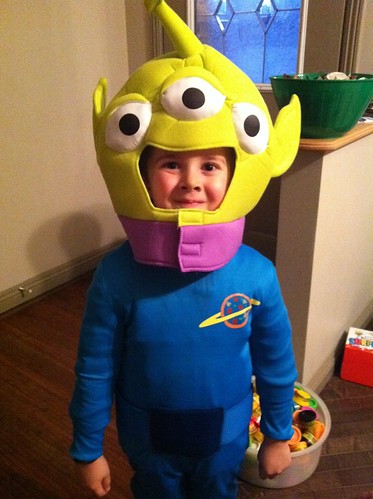 Though it is a bit of an exaggeration, it feels like I’ve only been home for 3 1/2 minutes in the last month. Unfortunately, that has put a HUGE cramp in finding a Halloween costume for Evan. If I were a GOOD mother, I would have bought Evan the stinking Spyro Skylander’s costume that he wanted months ago. Instead, I waited hoping I could either a) find it in Calgary or b) I could convince him to go as something else.

Unfortunately, neither a or b were going very well. Fast forward to this week (mere days before Halloween) and I have visited 7 Halloween costume stores in 2 days. That might not seem like that big of a deal until you factor in the fact that all of the Halloween stores were FULL of super scary costumes, props, etc which scared the holy HELL out of Evan. By the time we got to the last store, he made me carry him and he would barely look up to see the costume wall. Good times.

In the end, we found a Skylanders costume but it was in a a size Large. You could fit Evan’s entire body into the torso of that costume (because I tried to make it work….really I tried). There were about a billion other things to choose from that were cool. Instead, Evan picked a Ben 10 costume which is essentially blue pants, a green jacket and a foam watch. All for the low, low bargain basement price of $30. Oh and the foam watch was wrecked by the time we got home.

So yeah…..thou shalt not wait until the last minute to find your kids costume.

I think the scary displays should be in a clearly marked section of the stores. It is unsettling for small kids to be confronted with life-sized horror that we would never expose them to otherwise. Glad you found a costume that Evan is happy with.

We used to make ours growing up... I only remember buying costumes one time-- I was Bert and my brother was Ernie. LOL

I think I could handle making animal costumes and a few other things, but when my kids wants to be Captain America, I pass.

My mother always made ours - and then we had to wear the same one for years. I am more of a buy it the November before and hope they still like it. Unfortunately, I think those days may have come to an end...

I was not totally on the ball thus year with a 3yr old daughter and 3 month twin boys. Luckily my daughter is in the princess phase so she is wearing one of her princess dresses and then we borrowed dragon costumes from a friend who had twin boys last year and did the same thing with her daughter. Otherwise I'm sure I'd have been out on Oct 30th trying to scramble this year.

Haha, I usually do costume express online early so it's not a headache, but I took an easy out and sent dh to the store with the kids. This crazy robot thing followed them around and freaked them out. They don't much like being scared lol I don't find it's any cheaper to wait and buy it in town.

Honestly I don't know why I waited. Being away just meant that it snuck up on me. I can not believe it's already Halloween!