Okay, I am totally bored of blogging about our trip but if I stopped now I would be skipping the best part. After 6 days at Disney World, we boarded a bus to Port Canaveral to board the Disney Wonder Cruise ship. It was massive & the ship’s horn played “When you wish upon a staaaaaar”. It was so cool! We spent 4 nights and 3 days on the cruise. We boarded on Sunday afternoon. We went down to the running track & watched as we cruised away. It was cool & we had the whole deck to ourselves. There was a party upstairs that we stayed at a little while as well. Then we went to get the kids registered for the Kid’s Club. The cruise had activities planned for kids 3 to 12 from 9am to 1 am. That’s right…the kiddles could stay there until 1 am! Usually they went to bed way before that but Nicole did stay up one night until it closed because they were having a High School Musical talent show & who can so no to that? Anyway, the adults had reservations at Palo, the adults only restaurant on the ship, so we had to get the kids fed and back to the kid’s club before 8. Then we dropped them off & had the first kid free moments of the trip. It was nice to have some adult conversation & some wine. The kids went to see The Golden Mickeys, a live performance on the boat. Shayla loves to dress up as a princess & she even brought a dress for Nicole to wear. We never thought she would wear it in a million years but she surprised us & made a beautiful princess! 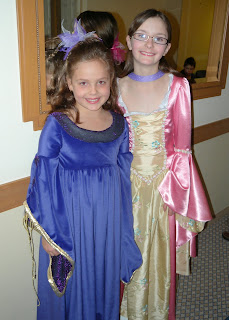 Nicole & Shayla in their princess dresses. Jenn made both of these! Aren’t they great?!? 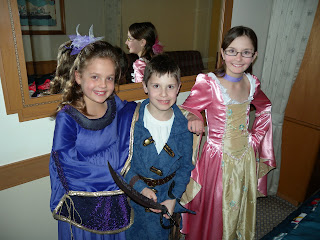 Nicole, Ronin & Shayla. He was the pirate in the bunch….argh! 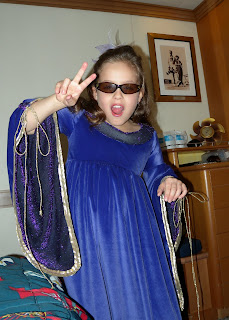 On day two of the cruise we landed in Nassau, Bahamas. We pre-booked a snorkelling excursion which consisted of a 1 hour boat ride, 1 hour of snorkelling & then a 1 hour trip back. This would have been great except it wasn’t warm. At all! Nicole & I snorkelled for all of 10 minutes before we came back to the boat b/c we were freezing. I was kind of sad that it wasn’t better weather for Will and Nicole’s first snorkelling adventure. They both seemed to like it, though, so hopefully we can take them somewhere where they can snorkel (in warmer weather) again soon. After snorkelling, it was back to the boat. Jenn and I headed back out later to do a bit of shopping but all in all there wasn’t a lot to see in Nassau. Back to the boat & to dinner. There are three restaurants on the ship & you are assigned to eat one night in two of them & twice in the the third restaurant. The cool thing is that your wait staff follows you from restaurant to restaurant. That means that they learn your little likes & dislikes so that they can give you a better experience. They moved our table closer to the Breen families every night so that the kids could sit at one table & the adults at the other. The food on the ship was consistantly very good though I wouldn’t rave about it. The deserts were always better than the entrees. 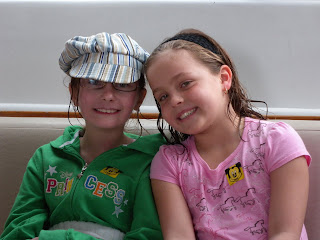 Nicole & Shayla trying to warm up after snorkeling 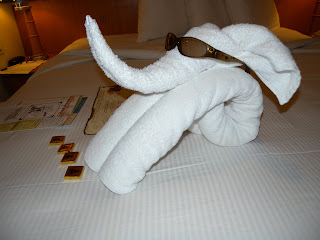 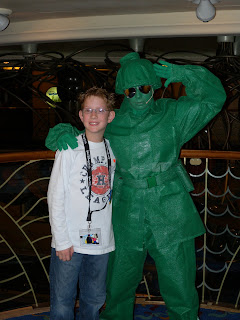 Will & Corporal Green from Toy Story

Day Three found us on Castaway Key which is Disney’s private island in the Bahamas. The cruise ship docks there & then we take over the island. There’s a family beach, a teen beach & an adults only beach. We were supposed to have an excursion on wave runners but the weather was windy & the water was too choppy. They were afraid Nicole would fly off so we didn’t go. We went and played on the beach instead. I think Will & Dewey were more disappointed than we were. One of the cool things about Castaway Key is that the Flying Dutchman from The Pirates of the Carribbean is moored there. We even got the kids’ picture with Jack Sparrow (much to my disappointment, it wasn’t actually Johnny Depp). There was a great island bbq & then more time on the beach. We loved it. After dinner we got to see Bolt in 3-D. It was awesome though all the adults were so tired I’m not sure we saw it all. Dewey was definitely asleep! After the movie there was a Pirate Party on deck. Nicole and I got some pirate Mickey ears & Wil
l got Pirate Goofy ears (complete with earrings) to get in the spirit. There was dancing & fireworks! 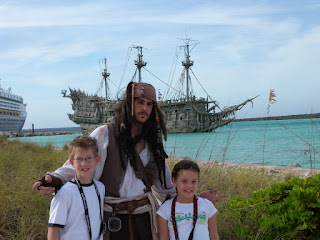 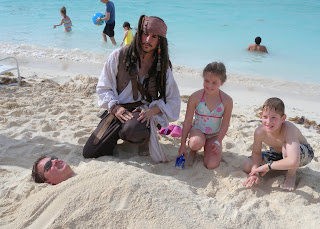 Will buried Dewey in the sand & then Jack Sparrow dropped by to chat. He told Will that he should make the sand look like a woman. Will laughed but didn’t do it. He would regret that a few hours later. 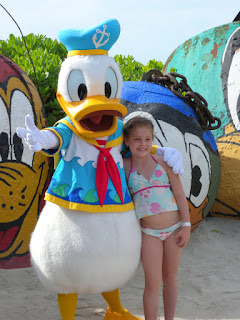 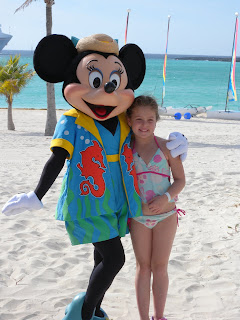 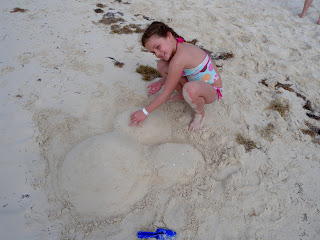 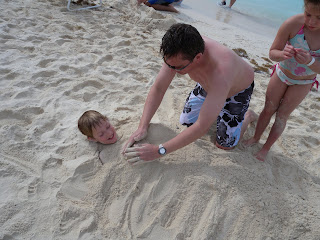 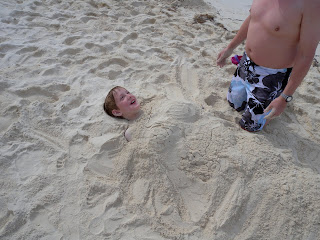 Will is mortified but there is little he can do. He is definitely regretting not taking Jack Sparrow’s advice! 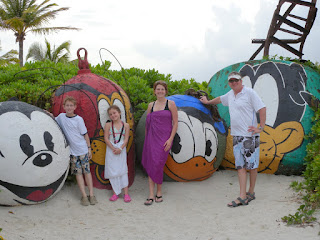 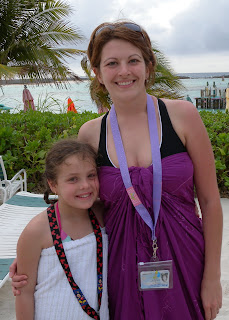 Me & Nicole hanging out at the beach 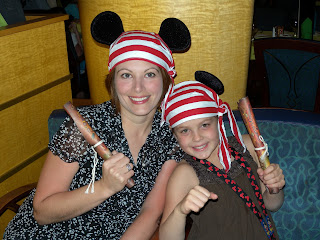 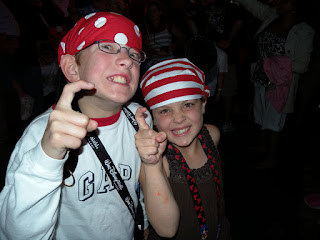 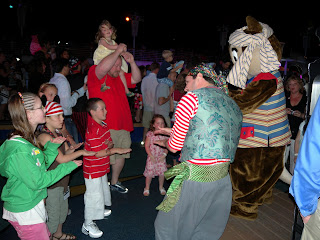 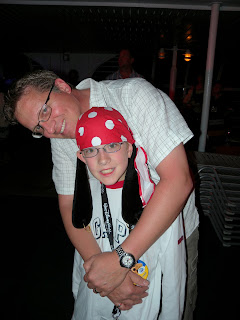 Day Four was a day at sea. I used the money we got refunded from the waverunners to book a hot stone massage at the spa. Yea me! It was a wonderful relaxing treat! Mostly we all hung out, laid by the pool & the kids stayed at the kid’s club. The weather made the boat rock more than it had during any of the rest of the cruise. I had to take some sea sick medicine after dinner b/c I was getting a bit nauseous! 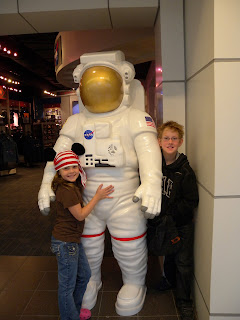 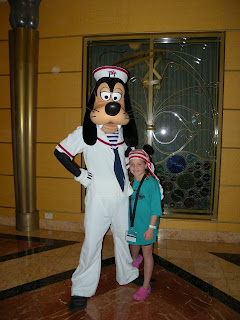 Nicole & Goofy at the Farewell 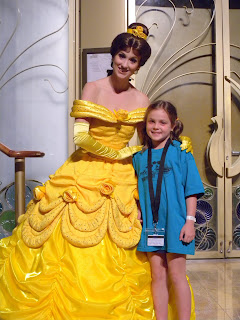 Nicole with Belle….the only princess she likes.

We docked back in Port Canaveral early Thursday morning. Then it was a whirlwind of debarking, getting back to the bus & getting to the airport. We arrived back in Calgary late Thursday night tired & cranky. Everyone was a bit sad to be done with vacation but glad to be home!

I would highly recommend the cruise if you ever get the chance. It lets everyone have a vacation together but there's lots of kids only and adults only activities so you can have your own space too. We loved it!

Just checking out all the vacation photos. It looks like it was such a great trip. Abby would have loved it, especially the cruise!